I woke up, and it was a beautiful day.  Score!, I thought.  I love Julie and Brian, and it made me super happy they would be warm and have the sun shining down on them while they took their vows.  It had been kinda icky the beginning of September, and was supposed to be partly cloudy, the forecast said.  I packed up the majority of my gear and headed to Chris's to pick him up, and charge my batteries.  I have this really bad habit of losing, well, everything.  It annoys Chris to no end that he's constantly looking for lens caps, batteries, and strobe cords.  My current lost item was my canon battery charger for my Mark II.  After a quick inventory and double check on equipment, we got on the road.  I texted Brian to see what room the guys were getting ready in, because the guys were getting ready in a hotel not too far from the ceremony/reception venue.

I received the location back from Brian, and when we got to the room, most of the guys were somewhere in the hotel.  The guys soon filed in, and Brian announced that Julie did not have her shoes or corset.  Oh no!  But - he said, her dad was going to get it.  Whewwwwwww.  Now, let me pause here and tell you something about Julie:  This girl has it together.  I have never met someone so organized and on top of things.  I imagine her daydreaming about marrying her true love... and forgetting her shoes.  That may not be the way that it happened, but that's the way I thought it would go down.

The wedding colors were black and white with red flowers, which is one of my favorite combinations.  Its just so classy and timeless.  The guys had shirts that did not have buttons on it, they came with it.  Hmmm.  Interesting.  And I may or may not have pinned a boutonniere on for a groomsman in such a way he would have been stabbed before the ceremony was even over.  (note to self, learn how to pin a boutonniere properly). 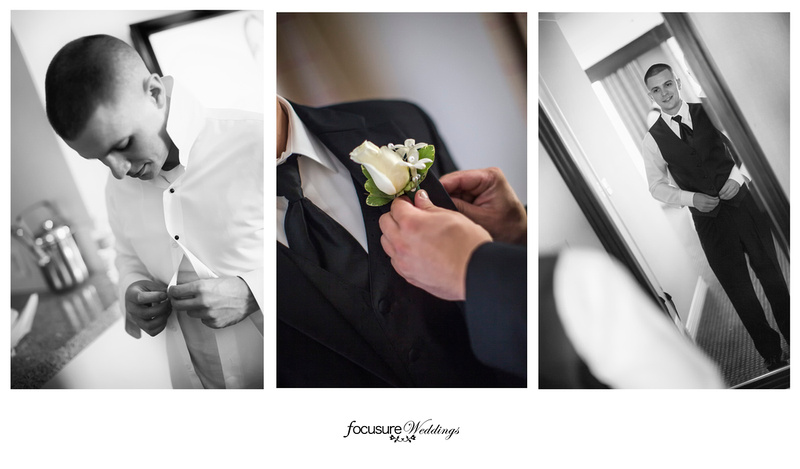 Most of the time, the guys are easy to photograph.  Brian and his crew were no different, and it was easy to pick out, right from the beginning, who the "class clowns" of this group would be.  They really had us laughing the whole day.  Chris took these photos and gave them the caption of "News team assemble!"  (from Anchorman, but I have no idea the connection) 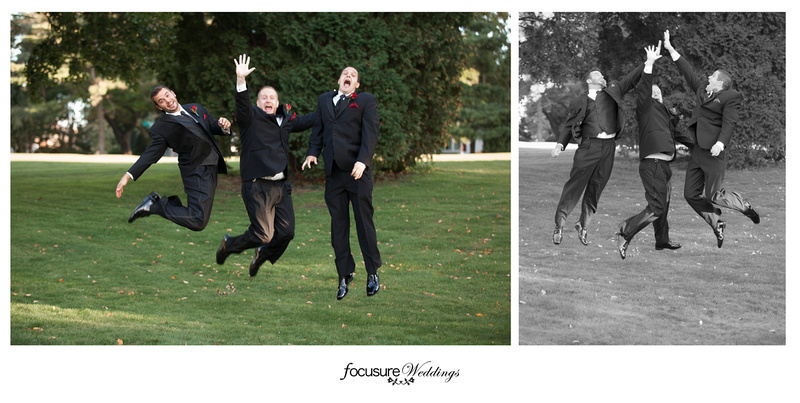 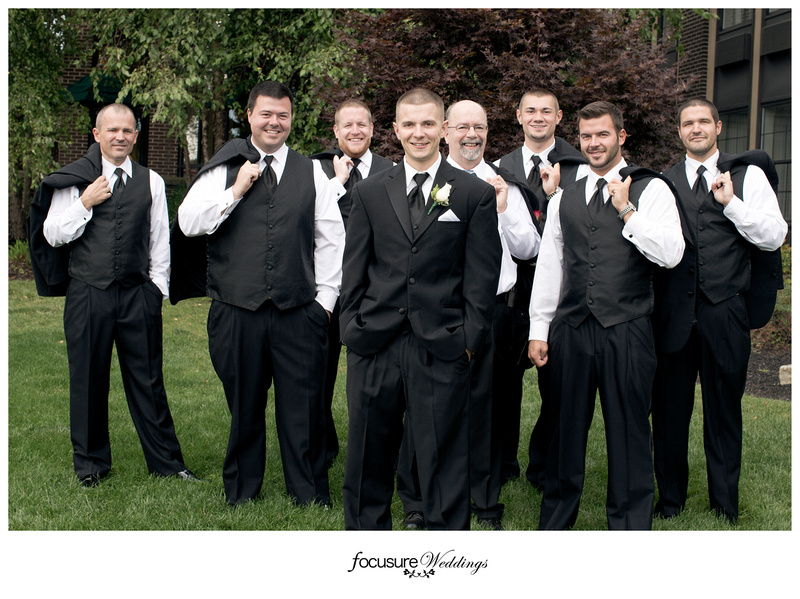 We finished with the guys right on time, and had to zip over to start with the girls... and I honestly have to say, the brides wedding prep is one of my favorite things to shoot.  All the little details that she has spent so much time picking out get to finally come together - and for such a wonderful reason.

The ceremony and reception were both held at Bellevue Golf Course in Melrose, MA.  The grounds were so beautiful.  We of course, got a little lost on the way in, but one of the girls was kind enough to meet us outside and guide us to the locker room where all the girls were located.  I loved the bridesmaid dresses - especially the fishnet extension of the top!  The button detailing on the shoulders really kept with the classy theme. 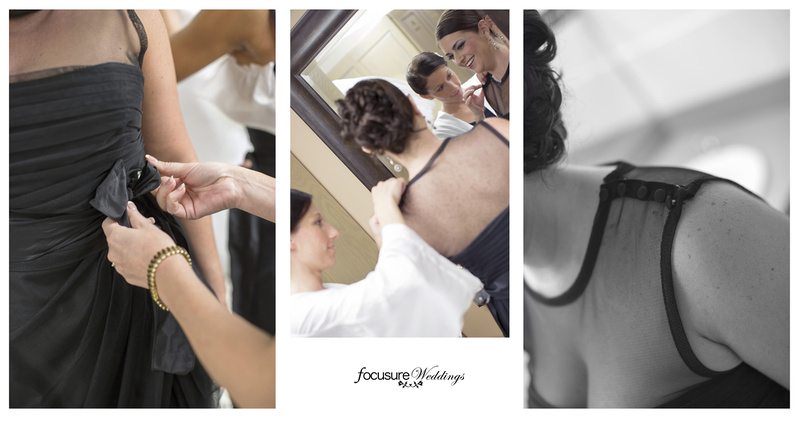 I saw these hangars start popping up a year or two ago,  while I was second shooting a wedding.  I just love them.  Not only are they cute and fun, they make a beautiful photo accompaniment to a wedding dress.  Julie's dress looked like it was made for her. 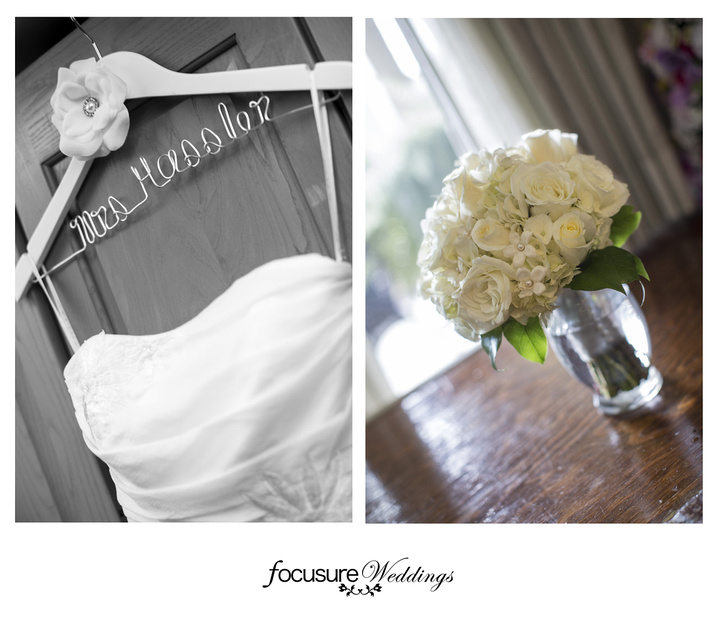 There were a few themes in the wedding, along with the black/white/red color scheme: these pale, off white flowers.  Julie carried a bouquet with a variety of white flowers (I wish I could tell you what type of flower they were, they were gorgeous. I really have to get myself a flower book, or maybe an all inclusive, "Know everything about weddings", book!).  There was a white flower in her hair, on the flower girl's dress, on her shoes, and her dress hangar.  I love how that element tied the two ladies in white together. 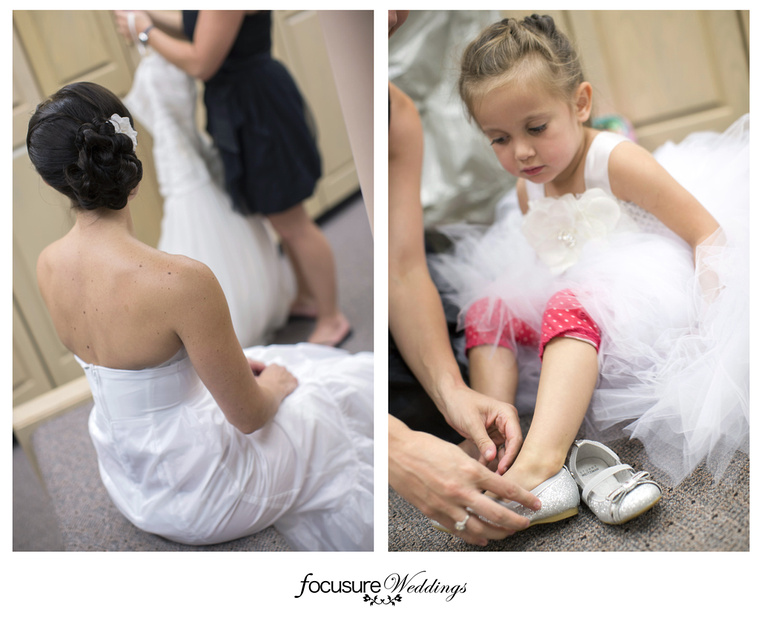 Her shoes were adorable and simple, and she added the flowers.  Julie and her girls got dolled up at a salon, before traveling by limo from their hotel to the Bellevue.  The challenge at hand:

Get the dress on without ruining the bride's hair.  (It was a group effort!) 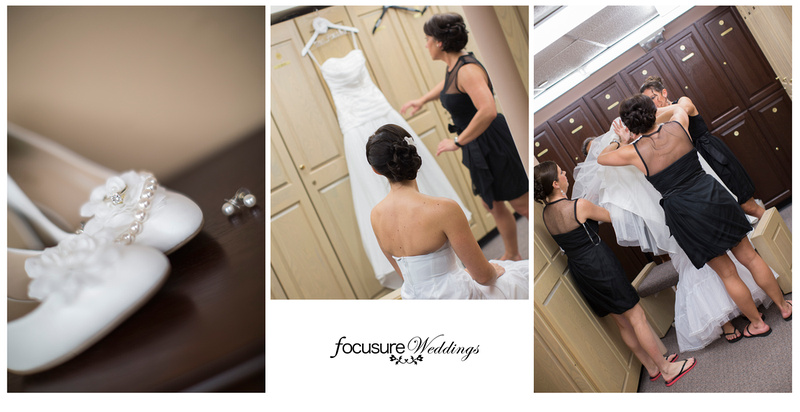 Dress is on, now for shoes! 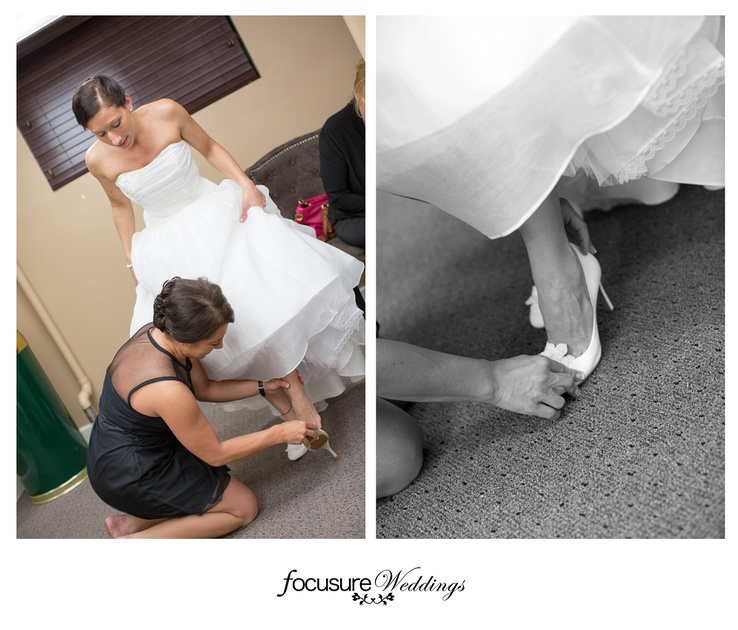 Adding the finishing touches, while Mom and (soon to be!) Mom-in-law look on.... 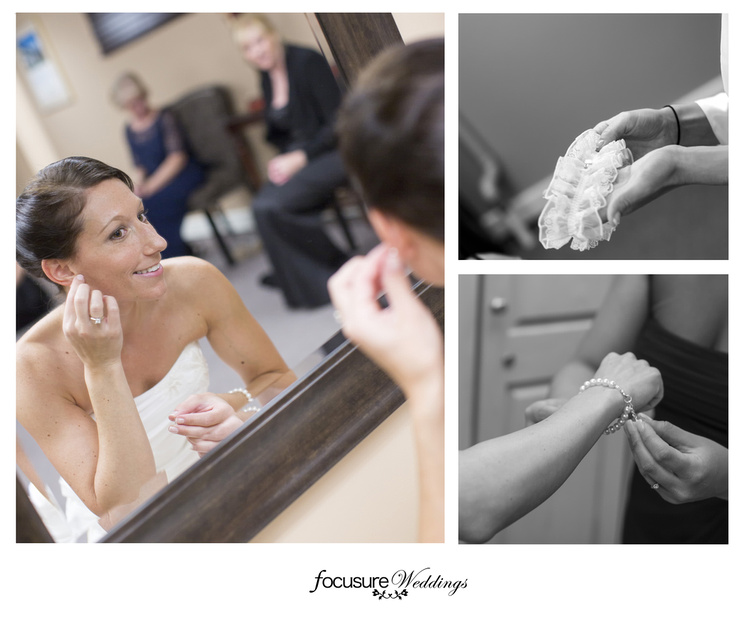 While I wanted to take some solo portraits of my beautiful bride, the sun wanted to play peek-a-boo.  There were these big, puffy clouds, and just enough wind up there to give me a cloudy/sunny flux, ooohhhhhh about every 4 minutes.  Chris would say, hold on - the sun is going behind a cloud in 30 seconds!  By the time I had changed my camera settings and gotten Julie into position, I had approximately 2 frames before it came out again, full force.  The sun out did make for some really beautiful photos, with a starburst sun and a deep blue sky. 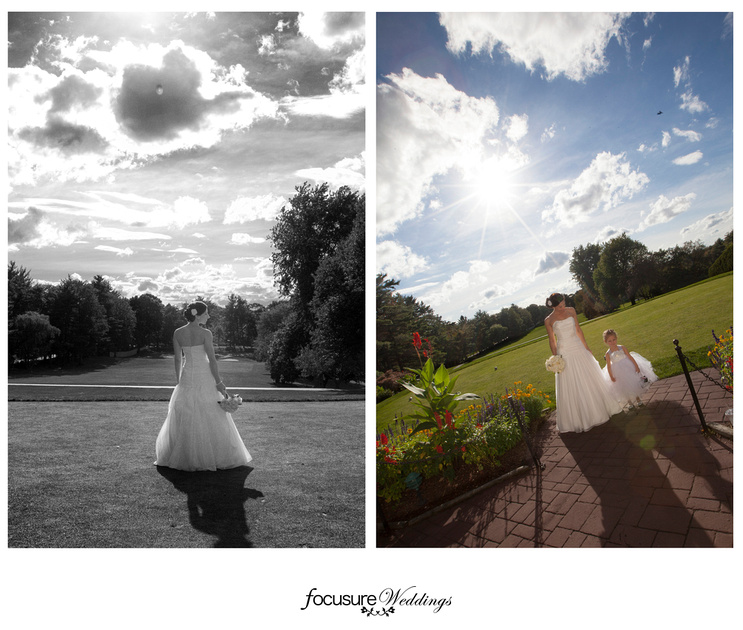 I loved that Bellevue actually let us stand on the grass of the course for these.  They were incredibly hospitable, and drove us to the ceremony site in golf carts!  Julie with her bevy of brunette bridesmaids!  (Not a blondie in the bunch! Brunette power!) 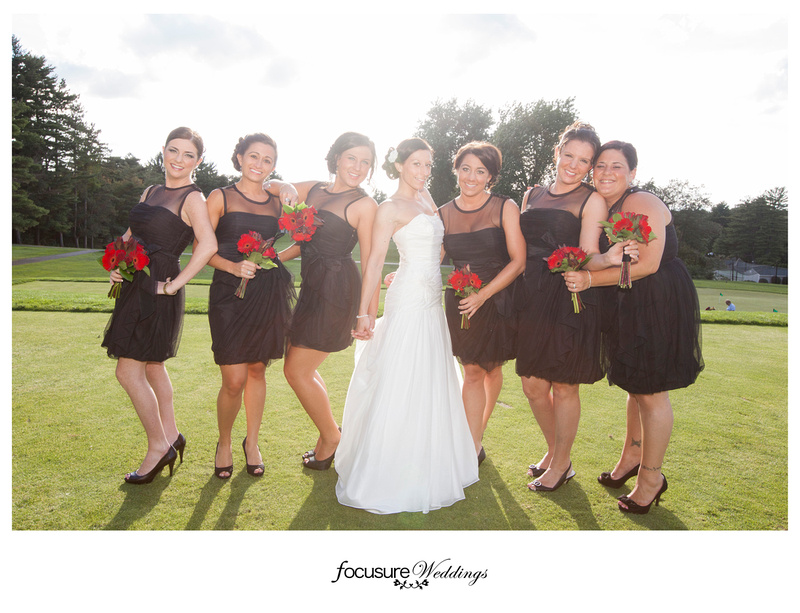 I took the first few bridal party jumping photos with everyone jumping except our couple... for the last set I let them jump.  They really went for it!  (Yes, this photo did take place after the ceremony.  I put it out of sequence because I felt like it belonged here more... I hope no one minds!)  Check out the sweet cannonball on the right... they meant business! 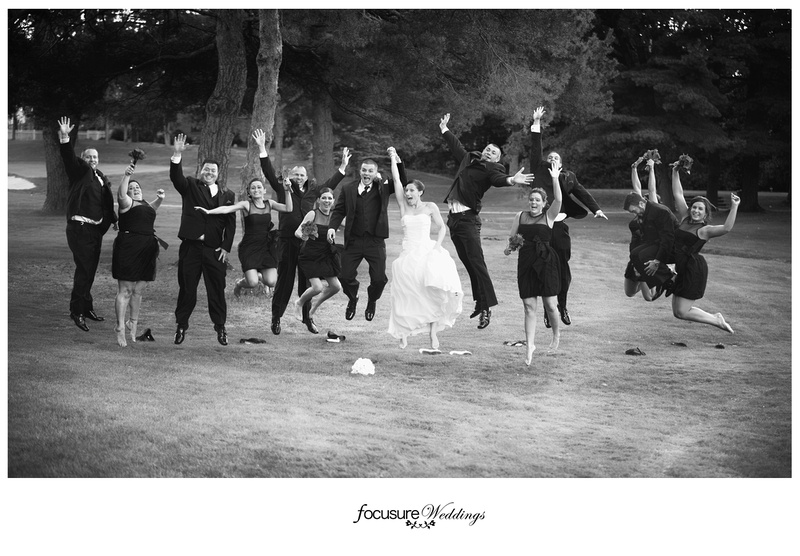 Julie shared with me, fairly early, that she was not going to see her father before the ceremony.  He would greet her to walk her down the aisle, and that would be the first time he laid eyes on his little girl in a wedding dress.  I felt so honored to capture this special moment for the two of them, and of course, told myself not to cry.  I just love his expressions.

"According to Greek mythology, humans were originally created with four arms, four legs, and a head with two faces.  Fearing their power, Zeus split them into two separate parts, condemning them to spend their lives searching for their other halves."    -Pluto's The Symposium.

Thankfully, sometimes we find them. 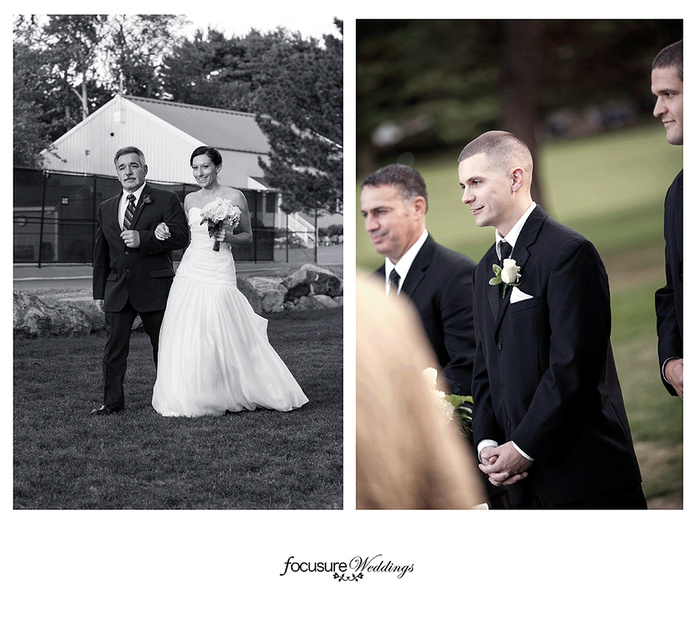 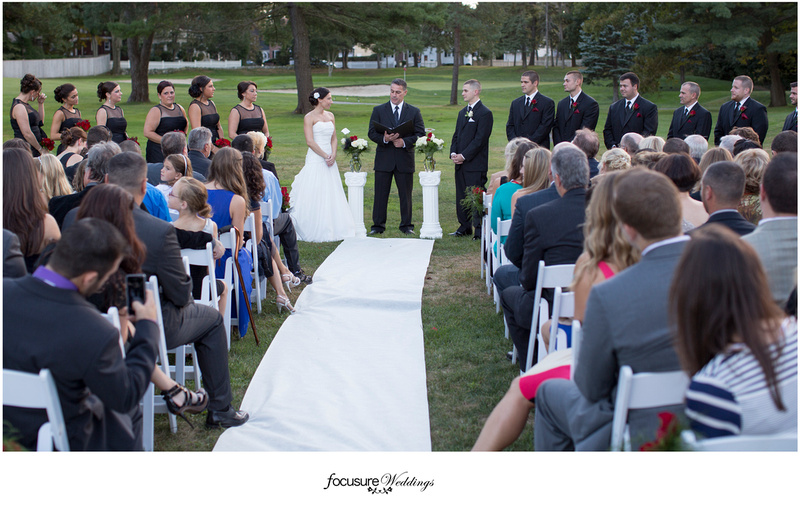 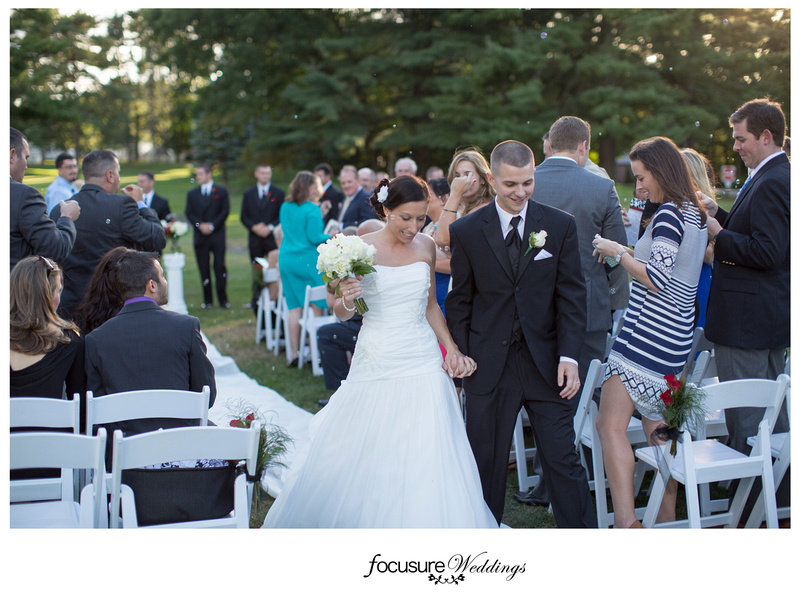 This was taken later in the night, but sharing it here also seemed fitting.  Their rings were just stunning.  I love solitaire diamonds... 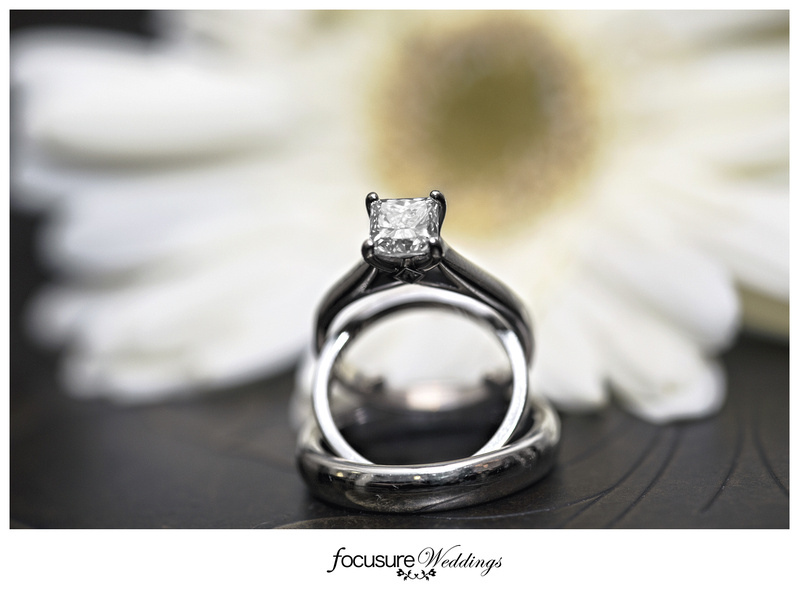 Remember how I said that Julie was a planner?  Well I don't know if she planned her ceremony so that we would have gorgeous golden light across the golf course for her photos with Brian -  but it happened that way. 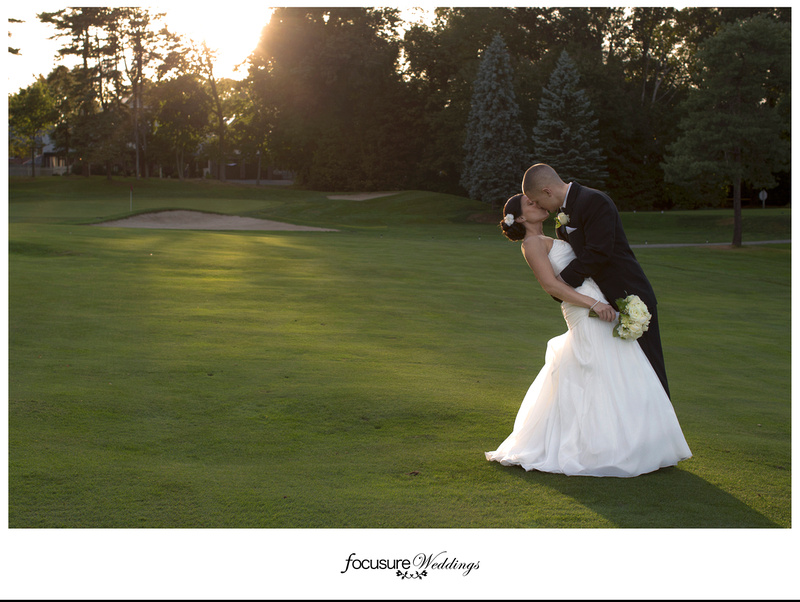 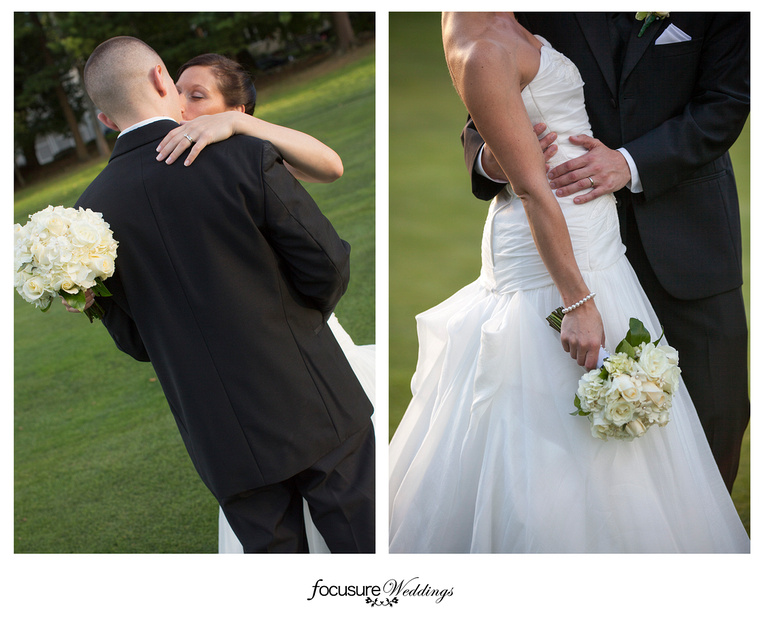 You know how excited I get when I ask a bride to do something that might get them dirty, and they don't refuse (in fear they'll get dirty)?  Very excited.  And to see people as wonderful as they are, be this happy and in love with each other, is an amazing thing.  I really love my job sometimes. 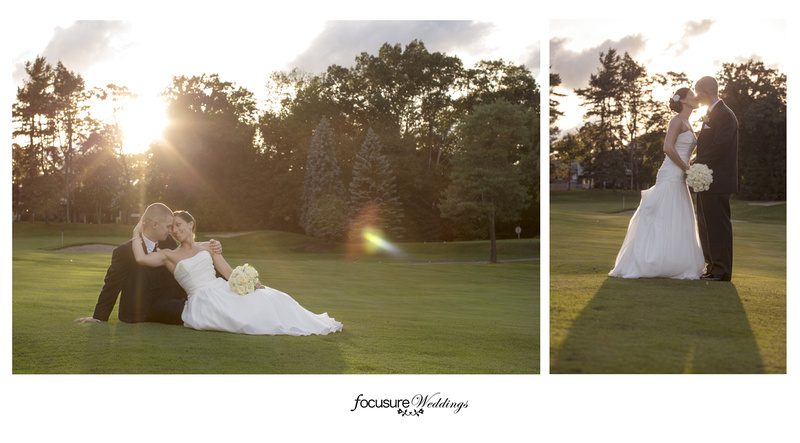 I hereby declare Brian the King of Dips.  They make it look easy, don't they?  After the couple's first dance. 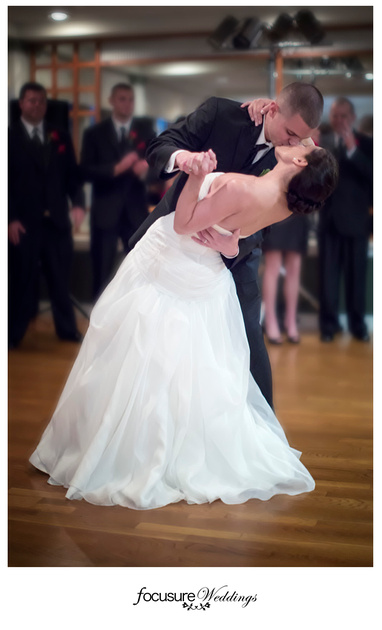 Cake and cupcake tower, so cute!  Although the couple didn't do an actual cake cutting, they had the bridal cake and cupcake tower set up in the cocktail area, with a candy buffet!  I would be lying if I told you I didn't eat 5 mini reese's on the way home. (Okay, it was 6.) 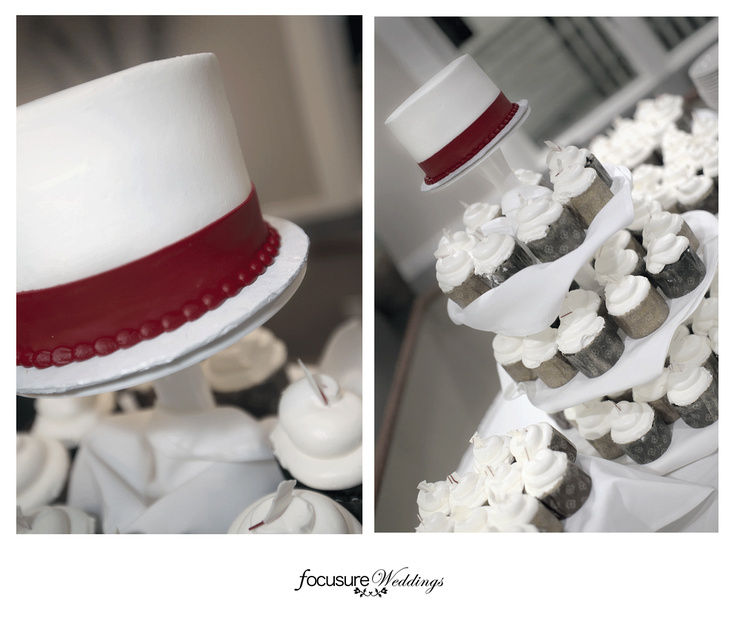 While the dance floor was too packed (with guests dancing... like, ALL the guests were dancing) to set up our regular photo booth, we grabbed the props from the car and just left them for people to use.  I had a hard time not laughing my shots blurry!  I even made it down there for a photo with one of the groomsman, tired as I was.  My face hurt from smiling.  :D

Hopefully this blog post doesn't crash anyone's computer!  There were so many great photos, it was so hard to choose them.  This blog post is being published the day Julie and Brian get back from their honeymoon (after spending two weeks in Aruba!), and we can't wait to hear how great of a time they had!  And show them the rest of their photos, of course.  To the happy couple, thank you both for allowing us to document and share in your special day, it was such a pleasure!